50 Must-See Movies (and Where to Find Them)

Now you can stop watching Contagion on repeat.

We’ve put together this curated collection of movies available across all major streaming platforms. At the moment this includes additions from Netflix, Now TV/Sky Cinema, Hulu and Amazon’s Prime Video. This list is based on what is currently available on streaming platforms of April 2020, and will be updated as more titles are added to these platforms. This is also based on UK and US availability, and will vary depending on your area.

This film based on the award-winning Stephen King novel Rita Hayworth and Shawshank Redemption, chronicles Andy’s time in prison but most importantly the irrefutable power of friendship.

Butch Cassidy and The Sundance Kid

Billy Wilder’s 1950 noir masterpiece pulls no punches in delivering a Gothic Hollywood narrative that feels decades ahead of its time.

Hitchcock does wonders in building suspense from a very limited set. All the action in Rear Window is set within the apartment, with the viewer taking a first-person role in viewing the activities of Stewart’s neighbours.

Now considered to be one of the best science fiction films of all time. Fans should also check out the 2007 documentary Dangerous Days: Making Blade Runner which details the production and legacy of the film.

Sorry To Bother You

Hilarious satire from Boots Riley that entertains just as much as it informs.

Newly available on Hulu, this film is arguably one of 2019’s best film offerings. Almost Hitchcockian in its approach to suspense and dark humour, it makes some stark points about privilege and social divides.

Read our review of Parasite here.

If Beale Street Could Talk

A beautiful addition to the romantic drama genre from Moonlight director, Barry Jenkins.

We Need To Talk About Kevin

Another Lynne Ramsay film added to the list. An expert take on the complex relationship between a parent and their child. Tilda Swinton gives a standout performance in

Read our review of We Need to Talk about Kevin here.

Arguably one of Fritz Lang’s most affecting films, M was one of the earliest examples of the influence sound has on elevating tension in the thriller genre.

Violent and visceral, this seminal Brazilian film masterfully takes non-linear storytelling to whole other level. Brownie points for those who also watch the documentary film City of God: 10 Years Later (available on Netflix).

This courtroom drama remains significant in an age where twenty-four-hour news cycles and social media have arguably resulted in the reaffirmation of personal prejudice and unhindered sharing of misinformation.

So influential to many modern filmmakers, the western and action genres, and to cinematic storytelling in general, Seven Samurai was universally acclaimed upon its release and throughout the 66 years since.

No Country for Old Men

There Will Be Blood

It’s funny, shocking and moving; only possible because of the expert script from screenwriter and director Martin McDonagh.

Read our review of Three Billboards Outside Ebbing, Missouri here.

You Were Never Really Here

The sudden colour changes from a broody palette to a Wes Anderson style set of pastels paired with 1940’s music creates a dissonance that fits the film so perfectly.

Read our review of You Were Never Really Here here.

Silence of the Lambs

An intense cat-and-mouse chase, but make it Scorsese. This crime action thriller sees an undercover cop and a mole in the police attempt to identify one another in their attempts in infiltrate a Boston gang.

The Burial of Kojo 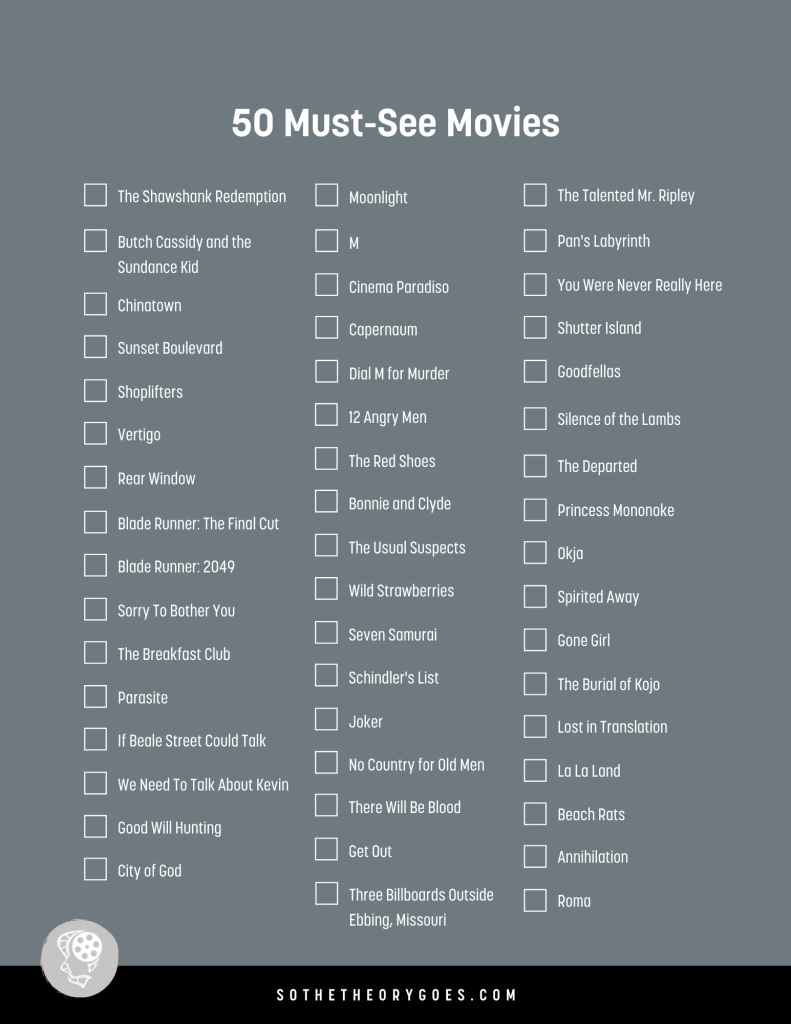