The work of Guillermo Del Toro is known for its dark storytelling, monsters, an underlying cynicism of humanity.

Books, comics, mythology, fine art, and sculpture have all impacted Del Toro’s work, establishing him as a clever, idiosyncratic filmmaker who does not compromise on his artistic visions to appease producers.

A protégé of the Academy Award-winning special effects artist Dick Smith, Del Toro went on to establish his own special effects and make-up company, and later produce and direct Mexican television.

Guillermo Del Toro became sought after following the success of his debut feature film Cronos, which won nine Mexican Academy Awards and the Critic’s Prize at the Cannes Film Festival. Mimic was his first Hollywood project, but it was The Devil’s Backbone that continued Del Toro’s projection and helped establish his unique sensibilities. Directing Blade II swiftly segued into writing and directing Hellboy, and really beginning to stamp his trademark on mainstream audiences. 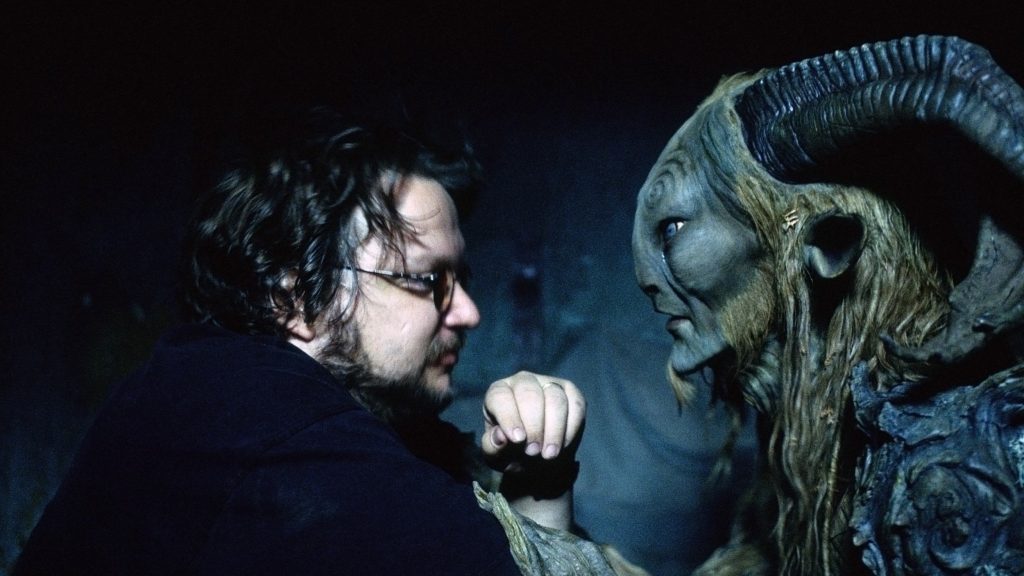 Pan’s Labyrinth, an unofficial, spiritual sequel to The Devil’s Backbone, achieved high critical acclaim for Del Toro’s juxtaposition of Ofelia’s fantasy world alongside the real-life horrors of the Spanish civil war. His screenplay was nominated for an Academy Award that year. The film itself went on to win Oscars for cinematography, art direction, and make-up respectively. Del Toro’s aesthetic visions had captured imaginations and saw him in demand to helm Hollywood’s biggest fantasy franchises. While Harry Potter or The Hobbit (of which he retains screenplay credit) didn’t pan out, Hellboy II: The Golden Army exceeded critical expectations, with Pacific Rim and Crimson Peak solidifying the Del Toro authorship.

As expressed in Edith’s description of her book in Crimson Peak: “the ghost is a metaphor.” The Devil’s Backbone opens with “what is a ghost? A tragedy condemned to repeat itself over and over again?” Del Toro’s films typically deal with the main characters’ fallibility alongside the supernatural. They routinely ignore stark warnings and pay the price. In Del Toro’s worlds, it’s Captain Vidal, Jacinto, Lucille, as the sources of pain and suffering. The only real monsters are humans.

Hellboy is a very human story populated by monsters, in a gothic fantasy setting. With the first film dealing with Hellboy deciding to either embrace his destiny as the bringer of the apocalypse or be human, Hellboy II sees him grappling with the fact that maybe he does belong on ‘the other side’. It’s his love for Liz and the prospect of fatherhood that makes his decision for him. He doesn’t want to live the life of a monster, or even as a normal human, he just wants to be with her.

The horror and fantasy elements of The Devil’s Backbone and Pan’s Labyrinth serve as a microcosm of the Spanish civil war, and as an entry point for human trauma. In Pan’s Labyrinth, Ofelia’s interaction with the magical world is a means to come to terms with the tragedy she has suffered in real life, ie. losing her dad and him being replaced by the evil Captain Vidal. The real and fantasy worlds parallel each other constantly. Just as the Pale Man represents the Captain, the vast temptation of his feast proves too much for Ofelia to resist, and the ominous pile of children’s shoes in his lair echoes the holocaust.

Ofelia’s hidden connection to the fantasy world is first signified with her putting the stone eye back into the statue – a statue that no one else pays attention to. The eye plays a big role in signifying the supernatural for Guillermo Del Toro and washing over the truth. Vidal himself stabs the rebels in the face and eyes – which is done to him before his death. Damaged faces or bloodshot eyes are a character’s awakening to the truth: Thomas stabbed in the face by Lucille in Crimson Peak, Jacinto’s bloodshot eye in The Devil’s Backbone, and Newt’s bloodshot eye in Pacific Rim after he ‘neural handshakes’ a Kaiju.

Guillermo Del Toro’s filmography is laden with many visual motifs and homages to his previous work. The fairies from Pan’s Labyrinth are clearly visible in the troll market scene in Hellboy II, for example. Red, black, and gold are typically used to colour the more otherworldly aspects, with muted, dulled tones to present the more contemporary settings. Again, Hellboy II’s troll market distinguishes itself by being vibrant in comparison to the real world, and as such appears more attractive to Hellboy himself.

Snowfall often provides a visual flourish to a gateway (literal or metaphorical) to a supernatural realm; such as the initial discovery of Hellboy, and his battle (the public’s first glimpse of him in action) with the Forest God in Hellboy II, the snow inside the house in Crimson Peak, and the snow-dusted labyrinth Ofelia explores in Pan’s Labyrinth.

Clockwork often represented on a grand or infinite-looking scale, signifies the unstoppable progress of time and evil. Captain Vidal pays special attention to his father’s damaged pocket watch in Pan’s Labyrinth, and even his own office resembles that of inside a clock. Cogs and mechanisms, inspired by Victorian steampunk technology, are plentiful in the world of Hellboy; and the ticking of the Grandfather clock brought to a halt in Crimson Peak brings about a ghostly encounter.

Mazes, underground places, monsters, tentacles, portals, and insects all feed into Guillermo Del Toro’s imaginative settings where characters are always discovering. The difference is celebrated, and Del Toro’s own Catholic faith is explored through imagery and resurrection or regeneration. The ability to build and breath life into such rich worlds, and often bring the contemporary and supernatural side-by-side, gives such a distinct feel to a Guillermo Del Toro film. They’re mysterious and tragic, but also warm and cathartic. Real-life and the magical realm can be just as terrifying or life-affirming as each other.

In an age of blockbusters, auteurs are becoming few and far between. Many unique directors will have a penchant for …

The postmodern auteur not only quotes, borrows and steals from other influences but they are able to present them in …