CINEMA PARADISO: A Slice of Nostalgia

The warm feeling you get from the first taste of your grandmother’s tomato soup. That is the only experience equivalent to Giuseppe Tornatore’s classical Sicilian-based film, Cinema Paradiso – released in 1988.

This tender story revolves around the life of Totò (Salvatore Cascio), a young Sicilian boy with a curiosity for the world of film. It often comes as a shock to viewers that his companion and mentor throughout the tale is a lonely, older man named Alfredo (Philippe Noiret). Alfredo works as a projectionist at the central location of the movie, Cinema Paradiso, an old-school theatre in which films are reviewed by the community’s priest. The theatre may not be much, but the nostalgic ambience it gives off is almost as comforting as the film itself.

The story of Cinema Paradiso is told in such a unique manner, that one must see it to truly experience it. Tornatore chose to open the film with a grown Totò, who now goes by Salvatore (Jacques Perrin). Introducing his adult self as a renowned film director, Salvatore is graced with flashbacks of his childhood when uncovering life-changing news about Alfredo.

Much like watching someone’s life unfold, the story is told in different sections of Alfredo’s experiences. At first, he is a young child with a strong curiosity and willingness to learn about the restricted film reels. He is then seen transitioning into his teenage years, played by Marco Leonardi, facing the trials and tribulations of adolescent life, all while continuing to learn about the realm of film studies. While still painting the imagery of a magical childhood, elements of adulthood and growth are shown in this stage of Totò’s journey. 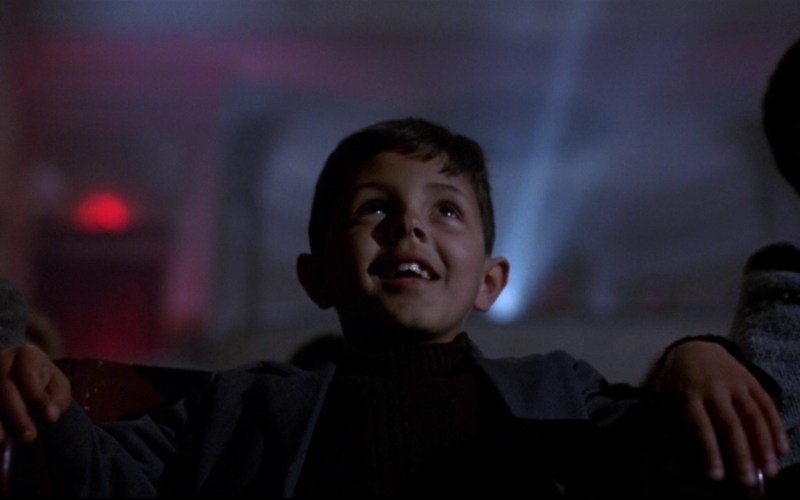 Although sometimes cliché, overall, Cinema Paradiso, is worth watching for its fuzzy feelings and nostalgic atmosphere. Definitely, a film to be seen with your loved ones and enjoyed in the place you feel most at home. If sentimental hits are not your first choice when picking a film for the night, there is an arc in this movie for every type of viewer. Whether it be the censorship of the kissing scenes in the religious town or the warm embrace of Alfredo’s personality, Tornatore simply did not miss with targeting all audiences.

Looking further at the technical aspects of this piece, the quaint Sicilian community and inspired imagery of the film make it an artistic and aesthetically pleasing watch. The colours and hues of the scenes are on the warmer side, adding to the atmosphere that Tornatore has created. Ennio Morricone can be thanked for the movie’s score, controlling the viewer’s emotions with his powerful and whimsical soundtrack.

Cinema Paradiso can be most appreciated when you miss home. Going through the same motions as Totò allows the audience to resonate with his actions and reactions to the news he is given. This film is exactly what one hopes it to be: a memoir of a hopeful young boy who
experiences aberrations in his young adulthood, and eventually grows older to regain that spark that he once had – all while maintaining a fairytale-like bond with his mentor and best friend! If there was only one film for you to watch at this moment, it would be Cinema Paradiso – a bowl of your grandmother’s warm tomato soup.