In a series researching the impact of virtual reality filmmaking, we got to speak with director Darren Emerson from East City Films. In our chat, we discuss the effects of VR documentaries, and whether it can have a lasting impact.

For more on virtual reality documentary, check out this film essay, and additional research interviews here.

VR has previously been described as an ‘empathy machine’, with the possibility of creating a ‘Wikipedia of experiences’ for audiences to explore. Do you believe that virtual reality is able to make audiences more empathic to the social issues of others?

The idea that VR is an empathy machine feels too simplistic. I would agree that there is a process of emotional change experienced by the viewer when they put on a VR headset though. This very physical act requires the viewer to shut themselves off from the outside world; and this act is in many ways part of the experience itself. Once in a piece of VR content it really is more about how the film or experience is communicated using the key attributes of the medium that can heighten the sense of emotional connection to the work. These tools are immersion, spatial story telling, filmmaking, audio design and a degree of interactivity. Attaining the feeling of empathy for someone is, in itself, a cognitive process and I have a sense that we can as VR film makers create work that resonates deeply with the viewer which in turn allows that process to be enabled.

I believe that to feel empathy in a piece profoundly relies on the connection between immersion, presence, narrative and the subjective context of the viewer. The film makers job in many ways is to create an experience that can be explored by the viewer whilst communicating a narrative, but within this medium there are added layers to the experience that the film maker can draw on to aid the process. Physical truth, the feeling of being there or “presence” as it is widely referred to, is an unique factor in VR that when combined with a narrative arch and the subjective narrative of the viewer, can create truly emotive and immersive experience that stays with us and is important. We as creators are in many ways asking for the viewer to bring something deeper into the experience, isolating them and allowing them to bring an essence of their human condition and understanding to the work in way that might not have been possible till now. It is these particular conditions in VR that in my opinion allow access to empathy. I will caveat all of this by saying that it is still early days, and we are still exploring what all this means… but this is my theory at the moment.

What efforts were made to heighten the emotional experience for audiences watching Invisible?

It depends if you mean within the film itself or how it is presented in a physical space. In terms of the film itself, well it is a very naturally emotive subject matter so I would hope people would feel a natural sense of empathy for people that have been detained indefinitely. However I am acutely aware that attitudes to asylum seekers and immigrants are, on the whole, divisive.

The difficulty making the film in VR is that most VR films at the moment are quite straight forward narratively. In a way it is because creators are working in a new field, which is hard, and also because I think we are all conscious that we need balance experience with story. Invisible was tricky because it was a documentary about a subject matter that isn’t very well known, and involved various contributors who did not want to be identified. Added to that is the fact the main locations of detention centres are completely off limits to press and film makers. So the film had to made in a creative way to tackle some of those challenges. We used lots of different techniques, and the film is separated in to different smaller chapters, that by the end feel like one whole experience. I think this combines to give the feeling at the end of the film that you have experienced a journey through a system that is frightening and oppressive.

To heighten those emotions we did use certain elements to draw the audience deeper into the film. Audio is very important; the music and the sound design really set the tone of the film. We always start there once we have our interviews recorded. Visually we do lots of things; slow motion at the end in the protest scene, layering of spheres to create a dream like sense of perception, cgi to create an environment that replicates the desperation and fear expressed by our contributors and disembodies them, stripping back their identity. 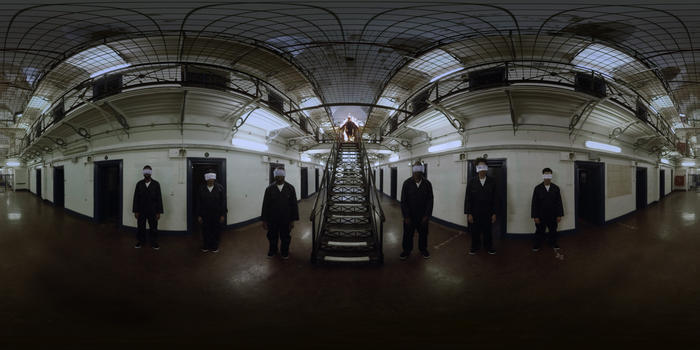 One thing I think all VR could benefit from is more thought with regards to its exhibition. A curated space for VR really adds to the experience of watching the content itself. I also think it would be good to have a space next to the exhibition where people can sit and talk about the experiences. Unpacking the experience and talking to other people about is really part of the fun of VR at the moment, and it goes some way to answering the negativity levelled at VR for being an isolating experience. That argument btw is something I disagree with. I am not seeking communal VR experiences. The power of VR is that it is a singular experience. No two people will see a film in exactly the same way, and that in itself is exciting and should be embraced.

Immigration is a very sensitive subject at the moment, especially in the UK. How have audiences reacted to the film? Has it worked to change opinions or promote change?

The film has been received very well and most people seem quite emotional after watching it. I think that is a combination of having something revealed to them that they weren’t aware of, which feels shocking and inherently wrong; and also from connecting to the environment and characters within the film. The film was designed to take you on a journey through the detention estate; arriving and being driven directly to a detention centre, entering an unknown scary place, realising that you have no power in the situation and are at the mercy of others, descending in to mental despair, and finally being released and having to pick up the pieces. By using different set pieces, voices and characters we hoped to build up an impression of what it is like for anybody in detention; a shared experience for many people. At the end we start layering the voices and visuals that we have seen during the film, creating a kaleidoscope of audio and visual cues that we hope allow the emotion of the experience culminate into something we hope is quite moving.

Many of the reactions have been shock, anger and sadness. Does it drive change? Well one of the key questions I think is how do we harness the emotion of watching a VR piece and direct it after the headset has been taken off.

Obviously UK audiences respond to the film, but it also resonates in other countries. The film played at the Melbourne International Film Festival; which was amazing because Australia has a very similar, and very damning record of immigration detention.

What made you decide to tell this story with immersive, virtual reality/360 degree storytelling over other traditional methods (ie. film)?

The power of VR in my opinion is the connection the audience has with the subject matter. In our society immigration, asylum seekers and migrants have a lot of coverage, much of it negative. This sort of coverage pervades our everyday lives, whether that is on talk radio, 24 hour news, Facebook and twitter or on any number of sources that we go to for news and comment. It is overtly politicised and divisive also. What VR allows is a personal experience of immersion for the viewer in that world, and within that the ability hopefully to connect with the personal stories of these individuals who have been caught up in a system they are powerless to control.

Although I would venture most docs on this sort of subject would be powerful and upsetting, there is a power to giving yourself over physically to an experience and allowing it to be come part of you. That is the power of this medium.

What do you think are some of the ethical implications of telling this story through virtual reality?

There are definitely ethical issues around the creation and presentation of VR content. The experience of VR can be intense, and therefore it is the responsibility of the film makers to make sure that they are warning people about the content and its possible effects. I am interested in how far we can go in terms of the intensity of the experience, but I think warnings like we have on traditional films would make a lot of sense. I have spoken more about the ethical issues around this, and documentary in this article which you are free to use: http://i-docs.org/9083/

There are certainly ethical questions around the 360 world you create, and more so in documentary. But these would be the same ethical rules that exist already when someone creates a piece of work that is viewed as being factually correct or filmed in a way that is documentary. Invisible is a documentary yes, but it uses dramatisation to achieve it. When using 360 I think the perception of the audience is that what they are seeing is wholly real…when often it is not.