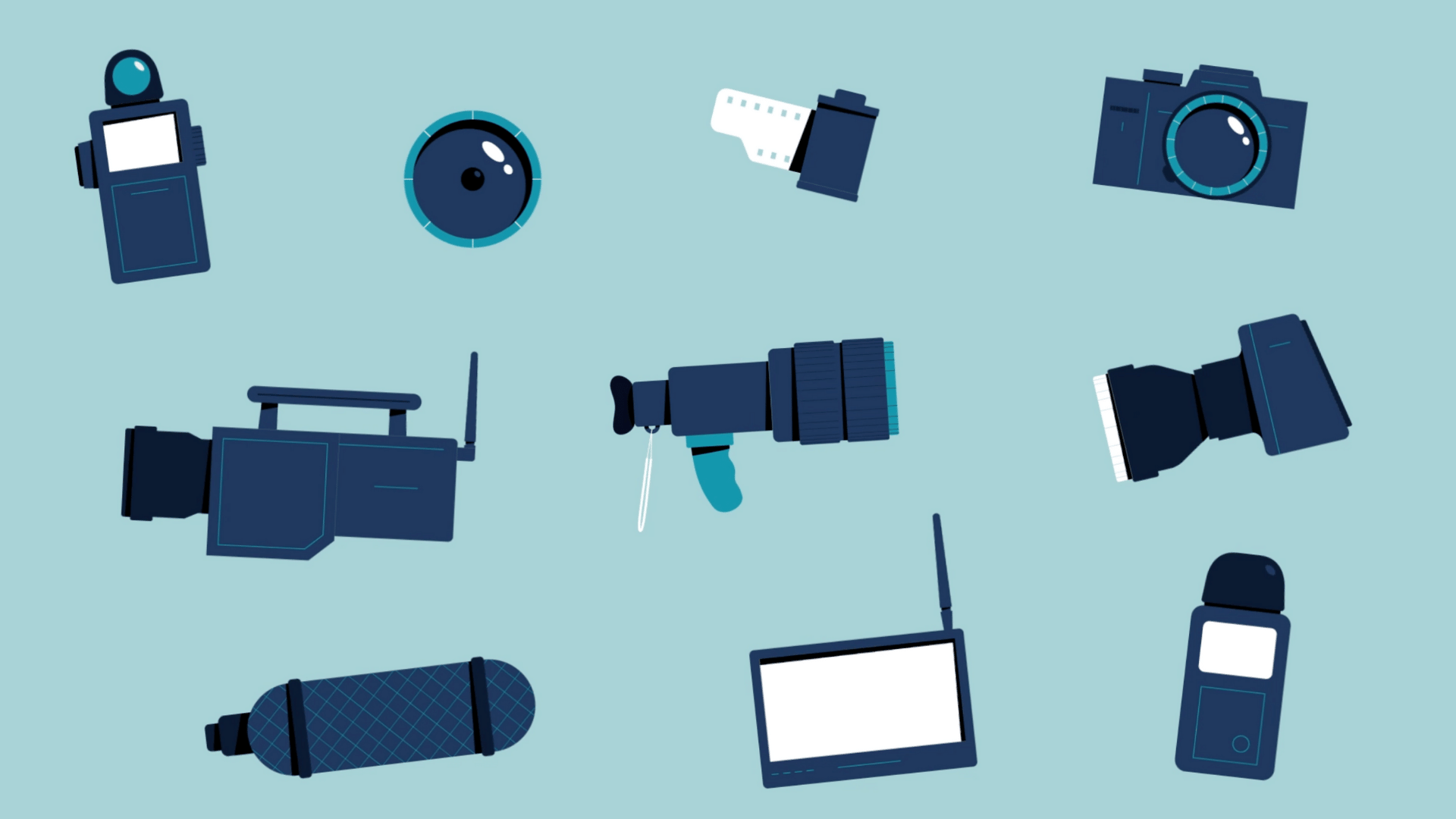 Founder + Film Editor / Sharing her thoughts on all…

The Importance of Taking Breaks

Film technology has seen many changes since the birth of cinema in the 1800s.

Here is a look back at all of the equipment that has allowed us to have what we use today.

From the 1830s onwards, more and more people were finding ways to make still images appear to be moving. They all used the scientific concept of “persistence of vision”. This just means that the eye takes time to see, so if images flash in front of our eyes before they have the chance to properly see them, it appears as though they are in motion. Here are a few ways that this concept was used:

The Thaumatrope from the 1820s

The thaumatrope was created by astronomer Sir John Herschel in 1824, but made popular by English physicist, Dr. John A. Paris (http://courses.ncssm.edu/gallery/collections/toys/html/exhibit06.htm). It was basically a piece of paper with designs on the front and back of it and two strings tied on either side of it. When turned, the designs on either side blended into one and it looked as though the picture was in motion. At the time, the toy was only meant for entertainment, but its invention piqued people’s interest in animation and the moving image.

The Phenakistoscope of the 1830s

This was a toy in the form of a giant magnifying glass. It had a disc with pictures on the edges which looked like they were in movement if you looked through the slots at its reflection in the mirror. It was first invented by Simon von Stampfer in 1832 but renamed the phenakistoscope by Joseph Plateau.

In 1834, William Horner invented the zoetrope as an improvement of the phenakistoscope. This optical toy didn’t have mirrors, which allowed the ‘motion picture’ to be viewed by several people at once.

The Praxinoscope in the 1870s

Pictures were attached to the rim of the drum and they looked like they were moving when the drum spun. Its design prevented distortion, so it quickly replaced the other optical toys

For more on the Persistence of Vision and Film, click here.

In 1885, George Eastman created the first celluloid roll film, which allowed inventor Thomas Edison and assistant William Dickson to invent the first camera to record movement in 1891. The Kinetograph-produced film could only be seen by one person at a time through a peep show machine.

It was made to be a toy, rather than a professional device. The machines could be found in arcades, and viewers had to insert a coin to see the film. While it was successful, others saw the potential for film to move from being an optical illusion to being a profitable business.

Cinema truly began with the invention of the Cinématographe in 1895 by the Lumière Brothers. This device recorded film stock and projected the footage on-screen. The projector was based on the design of a sewing machine, which holds its material in place while advancing it quickly and evenly between stitches just as the film needed to be held in place. Not only did the machine allow movies to be seen by more than one person at a time, it turned film-going into an actual event.

From this point onwards, technology started advancing very quickly. Other cameras and projectors started being made. Some of the most popular projectors were built by the Pathe Brothers (Pathe Freres) and also looked like sewing machines. By 1912, with the introduction of the non-flammable film, projectors were also being made for amateurs.

As cameras advanced so did the film they used. While 35mm is the standard, other widths were used. Here is a list of all the film widths that have been used in cameras:

8mm: In the 1930s, amateur cameras ran 16mm film twice to create this new cost-effective option. 9.5mm: This was created by the Pathe Brothers, for use in amateur cameras. This film had perforations going down the middle as opposed to the end. 16mm: This was first introduced in 1923. It is non-flammable and suitable for amateur use. It is still in use today. 35mm: This is the standard. Earlier cameras moved the film along horizontally, but now it goes vertically. 70mm: This is used in large cinemas. 35mm is enlarged to create this new format.

The cameras used during most of the silent era were held upright on tripods that only allowed them to move left or right and tilt slightly up and down. Moving them was a challenge, explaining why it was rarely done in this period. Also, cameras were hand-cranked until the end of the 1920s. Since the handle was turned slower than two turns a second, it gave the films the jerky, rushed look that this period is known for.

Up to now, feature films did not involve sound. While there were a few people who managed to make a sound on disc talkies in the 1900s, it still wasn’t possible for wide-scale cinema. Warner Brothers and Western Electric believed that the lack of sound took away from the film experience, so they invented the Vitaphone camera in 1926. It synchronized sound and picture through the use of discs and film. Once the first Vitaphone film was released in 1927 (The Jazz Singer), everything changed. Filmmakers had to adapt to the new technology and actors had to adapt as well. Since Vitaphone films were unlike any other at the time, cinemas needed to be outfitted with new technology to allow them to play the films.

Since the sound was recorded separately (visuals on film, audio on discs), they had to be synchronized by sound projectionists in cinema. This meant that there were frequent mistakes where the two elements did not match up.

In the 1930s, as sound pictures progressed, the Vitaphone and all other sounds on disc systems became obsolete. Instead, the sound was captured onto film in the forms of sound patterns, and projectors were able to read the patterns and turn them back into sound.

Technicolor was first introduced in 1932. Before then, color was added to the film by painting the photographs or using a stenciling system that cut out sections of the frame and tinted them. Both options were time-consuming and produced colors that did not look natural.

Films shot in technicolor used a three-strip camera that captured the scene in cyan, magenta, and yellow. When the strips are put together it created this great effect. With Technicolor, red and yellow looked brilliant so nearly every film from the 30s onwards had a fire scene.

Three strip cameras were very heavy and always had to be supported by a tripod. As a result, Technicolor films were rarely shot outside.

The Three Little Pigs (1933) by Walt Disney was one of the first films made in Technicolor.

From this point on, new developments in the film were focused primarily on the cinema viewing experience. Various methods were developed from the 1950s to the 1970s in order to enhance the experience including Cinerama in 1952, followed by Cinemascope in 1953. Since they are both widescreen, wider than normal picture is captured using anamorphic lens and squeezed onto 35mm film. Then, a projector in the cinema stretches it out.

The Robe (1953) by Henry Kosner was the first film to come out in Cinemascope.

The ultimate widescreen was introduced in 1970. Omnimax showed film ten times wider than normal for a shockingly real effect.

To create 3D films, a camera recorded two images through lenses several inches apart. Glasses worn in cinema allow the left eye to see what the left lens captured, and vise-versa. The lenses on the glasses match filters on the projector so each eye is able to see the correct image.

As technology advanced, filmmakers were able to create elements in the film that didn’t exist in the real world.

In films that featured creatures (that behaved like humans), animatronics was used. Actors wore the creature’s costume and only controlled the creature’s actions. A puppeteer manipulated their facial expressions by cable or radio control. Jim Benson’s creature shop pioneered in this.

For films like Star Wars, Motion Control was used. The objects (ie. Space ships) were filmed separately moving slightly as the camera moved towards it on rails. Each object was filmed under computer control against a blue background. The desired background is also filmed. Then, an optical printer assembles the shots and combines them into one.

Animation was also used in Film. This was either cel animation (drawn on cels and animated using a rostrum camera), computer animation, pinheads, model/clay animation, or drawing directly onto film.

7 Rules of Cutting: A Breakdown of Every Rule