Near-future Detroit. Crime has taken over the streets and corrupt corporation OCP has privatised the police force. Cop Alex Murphy is pieced back together as an untested cyborg police officer, after being shot to pieces. Haunted by memories of his former life, he seeks revenge against the gang responsible for his ‘death’, while being bound to “uphold the law”.

RoboCop condemns and basks in the excess of the 80s. The revenge-driven narrative is kept simple alongside outstanding social commentary on consumerism, gentrification, and existential ideas of the soul surviving everything. RoboCop is a modern day Frankenstein story, a robot Lazarus. He’s stoic walking mythology shooting with flair and embodying the charisma of a Clint Eastwood cowboy. The scraps of memory come back to Murphy as he begins piecing together who he really is. Murphy’s story is the death of a man and the rebirth of a product. But the hunger for technological advancement is not without its glitches.

The police force is just an arm of OCP, with corrupt senior executive Dick Jones flexing his muscles by testing automated police units. First up was ED-209. The cumbersome stop motion practical effects of the ED just add to its charm. In a glitch-ridden demonstration, the ED mows down a corporate suck-up in a scene befitting sketch comedy. It’s not ready. Luckily, ambitious executive Bob Morton has his own plan; the RoboCop. 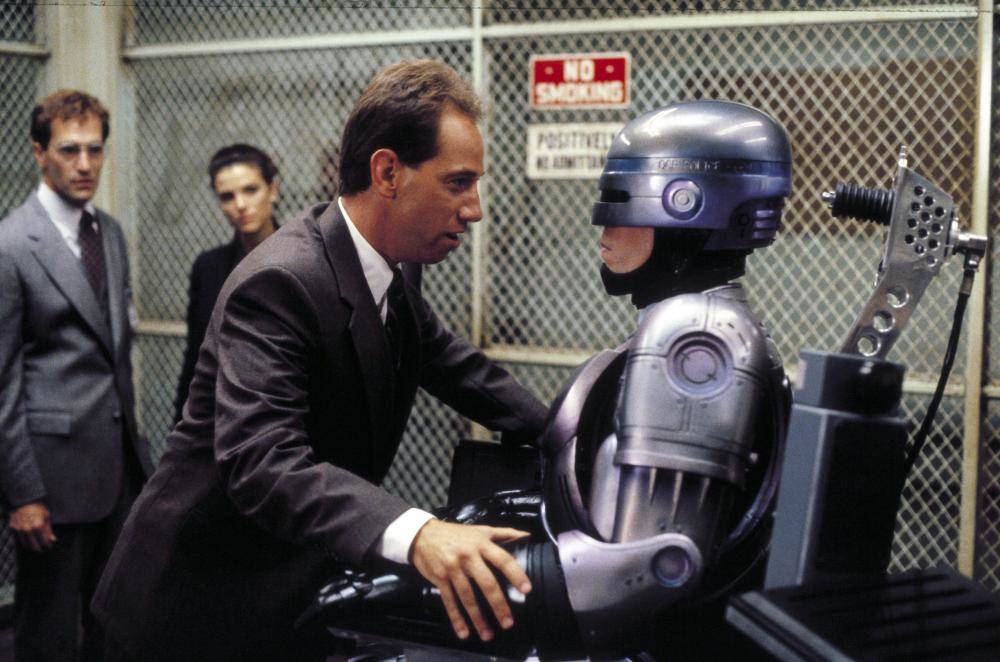 It steps into a class of its own by never taking itself seriously. Everything about RoboCop is magnified and ridiculous. The action is always over-the-top and unapologetic. Like everything else, the incredibly clever satire is in-your-face. It tears apart the smugness of the news and the repetitive idiocy of TV comedy, through brilliant intermissions from the main action, without losing any of its fierce pacing.

The supporting characters all have nicely defined agendas, ranging from the sly, the corrupt, and the downright psychopathic in gang leader Clarence Boddicker. As Murphy’s new partner, Officer Anne Lewis’ introduction is tough and simple as she scruffily takes out a flailing criminal at the police station. She’s not there for a romantic subplot, and it’s steering clear of anything forced or disingenuous that allows RoboCop to excel.

Copyright by Twentieth Century Fox and other respective production studios and distributors.

Synonymous with sci-fi action, director Paul Verhoeven has form in linking key elements of the genre to satire; most evident when teaming again with RoboCop writer Edward Neumeier for Starship Troopers (1997).

Spawning sequels, TV series’ and a misjudged 2014 remake, the continuous impact of RoboCop on action movies isn’t to be underestimated. Even first-person shooter video games carry its DNA, and it’s all down to the fast, gratifying entertainment at its core.

An unabashed allegory of Reagan’s America, it remains as relevant today as ever. Packing intensely layered themes and pathos of a man lost in the machine all inside a neat exoskeleton, it hits a tone that demands everything to be embraced as fun. The 1980s was saturated with science-fiction, but nothing quite like this.

WELCOME TO THE BLUMHOUSE V1: Collection of Contemporary Horror

Eerie, mysterious, deranged, and often horrifying concepts are all strung together in Blumhouse Television’s collection of contemporary films. Nocturne, Black …

THE LIGHTHOUSE: A Cinematic Descent Into Madness

This odd and very unique tale chooses not to conform to most traditional storytelling methods.

CITY OF GOD: A Visceral Chronicle of Violence

Raw, intoxicating, and sometimes too much to stomach, City of God is a coming-of-age film where growing up is not …