Sunglasses are more than a ‘Fashion Accessory’ [Essay]

In conjunction with the 60th anniversary of À Bout de Souffle (Godard 1960), and with that the considered launch of the notorious French New Wave, although the exact year is often contested, it is a timely moment to reexamine how great a movement this really was. With its roots in Italian Neo-realism, the true innovation and rebellion woven into the filmmaking of the ‘Nouvelle Vague’ are perhaps sometimes overlooked. This is simply because of the sheer detail of creativity and artistry that could be found on the screen. Thus, an appropriate way to highlight such astounding craftsmanship is to focus on a simple detail like sunglasses, which will reveal the incredible layers to so many films of this period.

The function of sunglasses, especially within the film, can appear as often a simple fashion accessory, with connotations mainly limited to a one-dimensional and superficial signification. By revisiting Jean-Luc Godard’s seminal work À Bout de Souffle, as well as Agnès Varda’s groundbreaking masterpiece Cléo de 5 à 7 (1962), completely reconfigure our understanding of such a fashion object. This seemingly modern accessory was in fact a prominent recurring motif in both Godard and Varda’s respective films. Vanessa Brown indicates that “sunglasses are a product of modernity” (9) which was a period of “onslaught on the eyes” (10), as the vision became the dominant sense in this rapidly increasing consumerist culture.

Before delving into these two films, an understanding of the socio-political landscape will improve our comprehension of why these two directors sought to refashion the role of sunglasses within the film. Although French women had won the right to vote in 1944, it was only after 1963 did women in France really begin to see significant change within governmental law, which granted them greater agency in society. For instance, in 1965, married women obtained the right to work in paid employment without their husband’s permission, and in 1967 contraception was finally legalised. Further to this, it was only in 1970 did the ‘Mouvement de libération des femmes’ (MLF) form, in the wake of the May 1968 protests, an autonomous French feminist movement that sought to challenge the patriarchy and advocate for women’s bodily autonomy. The 1960s thus marked an important period of transition, and it is no surprise that the main protagonist Michel (Jean-Paul Belmondo) wears sunglasses for most of the duration of the film, he remains stubbornly unaware of the changing social landscape happening around him. 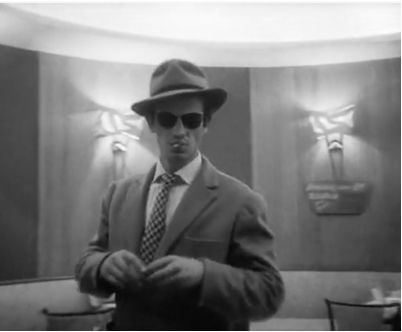 For instance, after first meeting Patricia (Jean Seberg), Michel is approached by a young female who asks: “vous n’avez rien contre la jeunesse?” (Have you anything against the youth?), while presenting him with a copy of the famous Cahiers du Cinema to which he replies: “Si. Moi j’aime les vieux” (Sure do. I prefer old people.). This serves as both a meta cue to the resurgence in cinema and its soon to be established newfound role within French culture, as well as a general reluctance to accept that times were changing, which is embodied in Michel’s attitude and his blinkered vision symbolised by wearing sunglasses. It is, therefore, no coincidence that other regressive male characters like Carl Zumbach (Roger Hanin), Parvulesco (Jean-Pierre Melville) and the police inspector (Michel Fabre) also wear sunglasses (see fig.2) to reinforce this notion of a male dominant gaze that is refusing to acknowledge this new period of modernity. 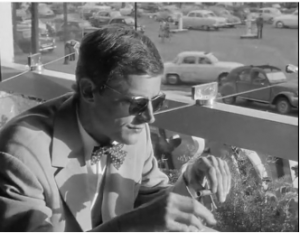 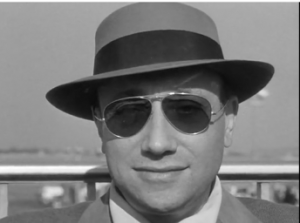 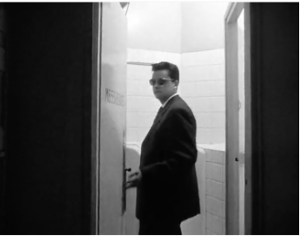 Henceforth, the fact that Patricia is almost always only seen wearing sunglasses when in the presence of other male characters who are wearing sunglasses indicates that she is complying with this imposed vision. While the ‘throwaway’ nature of Patricia’s Dior day dress is a critique of capitalist consumerism, it is simultaneously an indicator of her thinking she needs to conform to this feminine ideal in order to succeed professionally. However, as the narrative develops, and Patricia begins to assert greater autonomy demonstrated by a growing rejection of wearing sunglasses, she also subverts the purpose of the Dior dress (see fig.3), as it is in this same outfit that she betrays Michel and informs the police of his whereabouts, therefore confirming her complete independence. 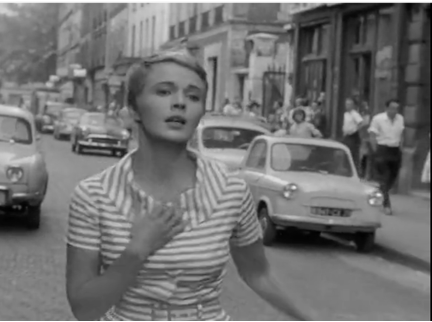 Figure 3 – Screenshot of Patricia running after Michel in the streets in her Dior dress.

The final cue for all this is one of the final close-up shots of Michel who lays dying on the floor, having been shot, while still wearing his sunglasses, which cuts immediately to Patricia who is not wearing sunglasses. This juxtaposition is further accentuated by the fact that it is Michel who dies and Patricia who lives on, only showing a fleeting moment of remorse for Michel. Interestingly, Michel closes his eyes with his fingers right before he dies to signal how his patriarchal vision and male gaze now belongs to the past and is redundant in this new age. Ultimately, the final shot is of Patricia staring directly into the camera who has now assumed the dominant and active role demonstrated by her imitating Michel’s repeated action of running his thumb around his lips (see fig.4). 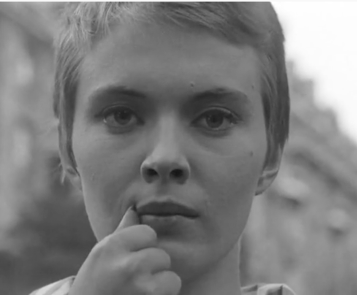 Varda adds a further layer to the purpose of sunglasses in the New Wave to highlight a sense of anxiety and unease when confronting one’s self in Cléo. During the first half of the film, Cléo (Corinne Marchand) is obsessed with beauty and her image, “underscored by the presence of mirrors and other reflecting surfaces” (Greene 91), as she arguably wears sunglasses both to reinforce the star-image of herself as a performer as well as this notion of seeing one’s self through a filter, previously explored in chapter 2. Primarily, she is concerned with “the way she ‘looks’ to others” (Greene 91), as at the start of the film, she tells herself while looking into a mirror: “tant que je suis belle et je suis vivante et dix fois plus que les autres” (As long as I’m beautiful, I’m more alive than others). Thus, to echo the words of de Beauvoir: “social life demands that woman ‘represent’, that she shows off, but does not create between her and others real communication. It does not wrest her from her solitude.” (598) In this light, it can be understood that Cléo’s sunglasses also create a barrier, stopping her from interacting with people, as she must maintain a certain reputation expected of her from society. She must ‘show off’ her beauty, as this is the role that is demanded of her as a female star, which simultaneously enforces her solitude. This, therefore, supports Sonia Rykiel’s claim, who as a French fashion designer stated that “some garments are shields…that attract and repel gazes, garments are like armour” (qtd. in Cixous 120), which can also be applied to sunglasses, as this is also a fashion item one wears. Cléo wears sunglasses not only to maintain a certain star-image of herself and attract onlookers to admire her beauty but also as a form of armour, a shield that prevents her from having to interact with others (see fig.5), as this was sadly what was expected of the female, as alluded to by de Beauvoir. 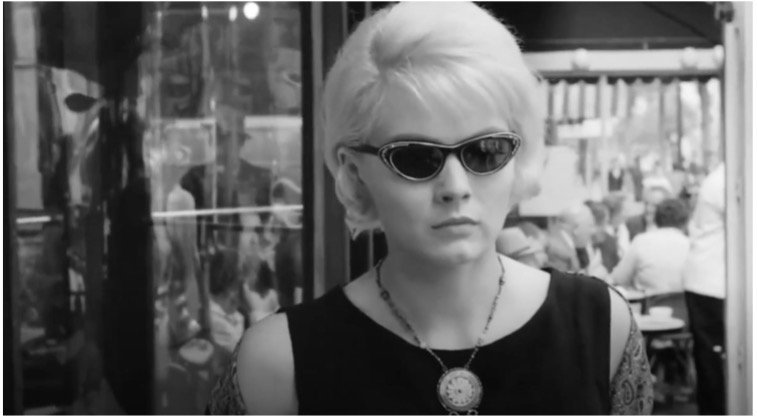 However, as Cléo begins to move through urban spaces and fashion herself a new identity based on her encounters and experiences, she no longer has a need for her sunglasses as she does not need to filter her vision. She learns to become comfortable and happy with this new, honest image of herself she has constructed, while simultaneously breaking free from an imposed solitude by interacting more with others, therefore rejecting this fashionable accessory. Varda’s ground-breaking feminist film demonstrated the potential for female progression in this new decade.

Although it is not necessarily a prominent motif in Le Mépris, it is still interesting to briefly explore the function of sunglasses within another meta-classic of Godard. Brigette Bardot plays a disdainful but devastated wife, who is hurt by her husband, perceivably enabling Prokosch’s (Jack Palance) advances on Camille. However, as Le Mépris is a meta-analysis of cinematic structures, Godard, therefore, offers a “complex and self-conscious treatment of Bardot’s appearance and star persona” (Gaffney, and Holmes 61) adding further significance to her outfits. Thus, the significance of Camille wearing sunglasses pertains to a similar notion to that in Cléo, where the sunglasses both serve as an indicator of Bardot’s star quality and a filtered vision (see fig.6). Understandably, however, Camille’s sunglasses don’t necessarily suggest her vision is blinkered or filtered but instead that of the female star and the system of stardom as well. It is no coincidence that Prokosch, the tyrannical producer, also wears sunglasses during segments of the film (see fig.7).

He is also completely fixated on Camille’s beauty, despite her being married and the obvious language barrier. Notably, it is only Camille and Prokosch who die in the film, after a fatal car crash, therefore signifying that this established system of ‘traditional’ stars and producers being obsessed with flawless beauty standards was now no longer fashionable or appropriate in this new era of filmmaking. Godard was therefore signalling how “the New Wave created an alternative model of stardom” (The New Wave at 50 4) that introduced a “new type of glamour – less overtly sexy, more cerebral and supposedly more realistic” (3).

Overall, while sunglasses may often appear as merely an accessory or minor detail of a character’s style; New Wave directors and costume designers certainly reconceptualised the significance of this object. By focusing on what may appear as a minor and insignificant accessory, this sartorial object certainly enables, as it were, to see and interpret the New Wave with ‘new glasses’, an enhanced perspective. Sunglasses certainly had a significant function within the New Wave film, despite their seemingly simple function of merely a fashion accessory, such an obscure detail that could easily be overlooked. In light of this, I urge you all to revisit this fantastic period of French film and really study the images these incredible directors craft, it will completely reorientate the way in which you experience a film.

Recent MA in Film Studies, interested in all facets of filmmaking and cinema - especially the notion of rebellion and Afro-Surrealism. I am a teacher, writer, podcaster of film amongst other things, based in Amsterdam.